Scope of the Disaster

Nepal suffered 2 major earthquakes and subsequent aftershocks in April & May 2015. The earthquake sequence destroyed 498,825 houses and rendered another 265,000 houses uninhabitable.

As a result of the earthquake events, approximately 8,790 people died and more than 22,300 people were injured. A Post-Disaster Needs Assessment (PDNA), carried out under the leadership of the Government of Nepal (GoN), and with the broad collaboration of numerous international partners, was completed in late June 2015. The PDNA identified total damages and losses due to the earthquake events and aftershocks of approximately US$7 billion, with total reconstruction needs of about US$6.7 billion.

As the earthquake sequence destroyed housing across 14 districts -- effectively rendering some 3.5 million people homeless -- the largest single need identified in the PDNA was housing and human settlements, accounting for US$3.27 billion or almost half of Nepal’s total reconstruction needs. Following housing, the education sector suffered the second highest level of damages and losses at approximately US$300 million, while the health sector impact is estimated at US$60 million. More than 3,000 public buildings were destroyed or damaged in addition to the country’s loss of irreplaceable historical monuments and cultural icons. The two major earthquakes and aftershocks have resulted in a large-scale disaster affecting close to ten million people across at least 30 districts throughout Nepal and will require a major and sustained recovery effort.

The immediate impact on poverty, livelihood and output has been severe. According to official estimates, in the 14 most heavily affected districts (which includes Kathmandu), about 9.4 million people have been impacted by the disaster.  Within the most-affected districts, the effects are disproportionately felt by the poorest quintiles of the population (including households headed by females, individuals with disabilities, and the elderly) in rural areas. Even within the relatively prosperous areas that have been affected, households that were already poor and vulnerable have been particularly exposed to hardship in the aftermath.

Multimedia: The Nepal Earthquakes of April and May 2015 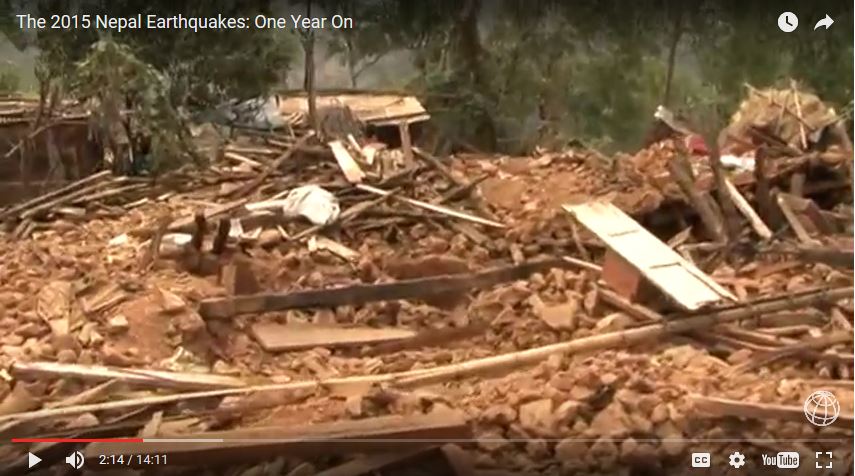